London Stadium is located in the South of Queen Elizabeth Olympic Park, with a total of five transport hubs in the surrounding area.

Stratford station is our recommended route for all home supporters travelling to and from London Stadium given its capacity. Once at Stratford station, or your chosen transport hub, Supporter Liaison Officers, stewards and signs will direct you to the Stadium. 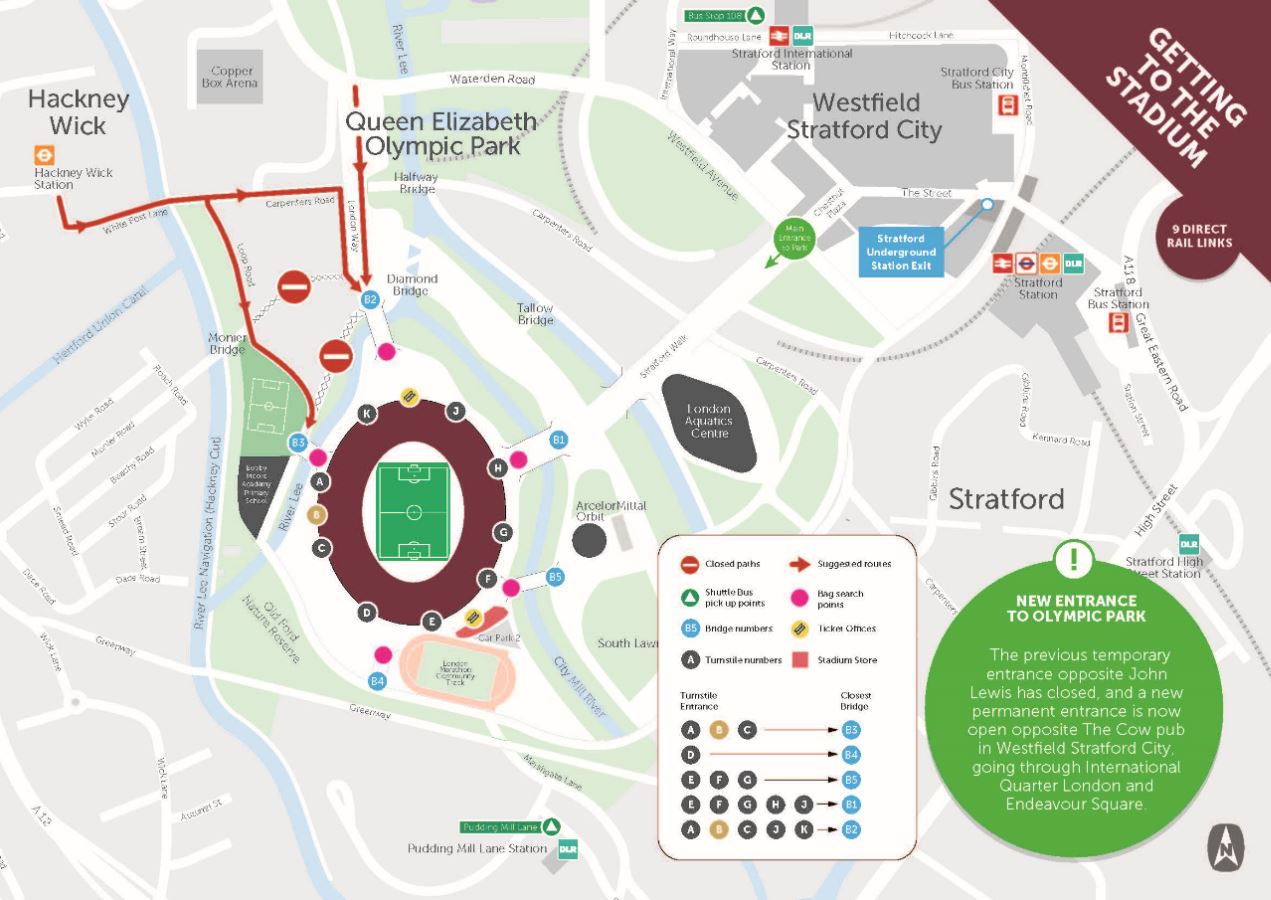 In order to allow easy access and cause minimal delays, it is recommended that supporters arrive at least one hour prior to kick-off and avoid bringing any bags to matches unless absolutely necessary. Large suitcases or luggage are not permitted in the stadium. We'd recommend viewing London Stadium's permitted and prohibited items list before heading to the stadium.

All bags will be searched and supporters may also be asked to remove jackets or coats in preparation for search. All approved bags are also subject to additional inspections within the Stadium. There will be an access lane at each checkpoint for supporters with accessibility needs.

These are not ticket check points, allowing supporters without tickets to gain access to the podium and visit the Stadium Store and Ticket Offices.

To further reduce queuing times at the search checkpoints, it is recommended that supporters access the stadium island via the bridges in closest proximity to their respective turnstile entrance. See our searching points map for an illustration of the following information:

Please note, your Season Ticket card, Membership access card or ticket will only be valid at your dedicated turnstile.

Please be assured that London Stadium’s search policy is entirely for the safety and security of every supporter attending West Ham United matches.

Any supporters who arrive late for the match are advised to head to the relevant entrance for their seat, where they will be directed to the late-opening turnstile.

The roads between the station and Stadium will be closed to traffic three hours before kick-off to help get you to the ground quickly and safely. You may not be able to take the walking route that you are used to on non-matchdays but our Supporter Liaison Officers and stewarding team will direct you along the safest route to London Stadium.

The Accessible Shuttle Bus Service will also be in operation.